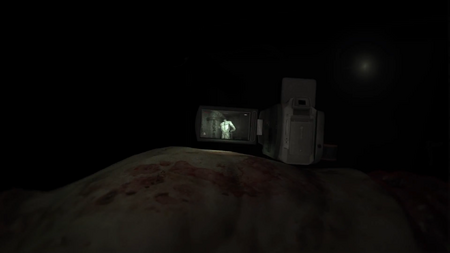 The Camcorder is an item used by protagonists Miles Upshur, Waylon Park, and Blake Langermann the in Outlast series.

Protagonists Miles Upshur, Waylon Park, and Blake Langermann view the entirety of the events in the Outlast Series through the lens of their camcorder. The device has two modes - Normal View and Night Vision Feature (NM and NVF). It is labeled as a "Spatlin HDD Night View" on the side of the case. In order to use the Night Vision Feature mode, you must use Batteries - this makes the Camcorder almost a management minigame, wherein you need to ensure you have battery power before entering dark areas. When you use night vision, it seems like most characters have glowing eyes, which is similar to promotional shots of Outlast.

When the battery is fully drained, the night vision's range is reduced, and another battery is required for full range. The night vision will still work without batteries, but you'll lose audio capture, have lesser range, and have poorer quality. Luckily, batteries are pretty common throughout the game environment. The camera is also outfitted with a zoom function, allowing players to zoom in and out and scout far ahead. Zooming can be used with night vision, which illuminates at a distance and allows for really detailed scouting. The Night Vision Feature can also be used to spot the Walrider, making it a hugely powerful feature.

In some cases, the protagonist (specifically Miles) will use the camera regardless of whether or not the player prompts them to. These situations, such as the death of Billy Hope and Chris Walker, are for storyline purposes.

In Outlast 2, Blake Langermann uses a better camera with left and right sound detectors, a new camera hud, and a waterproof case. This is an upgraded version of the same camera, as it is still produced by Spatlin.

When Miles is captured by Richard Trager, Trager takes the camera and props it on a sink to record himself cutting off Miles' fingers, possibly to use it as a snuff film.

In the Female Ward, during a botched long jump by Miles, the camera falls off Miles' person and into a hole in the ground, forcing Miles to travel back down to get it as it's still needed to navigate through dark areas. When the camera is found and retrieved again, it is badly damaged, as the eye lens is cracked and the camera's view will malfunction and flicker at random times.

The camcorder is used by Waylon Park in the Whistleblower DLC, and is taken off a tripod right before the slaughter in Outlast begins. After escaping Eddie Gluskin's torture, the player loses all the batteries for the camera, and has to find batteries before the camera's remaining battery is depleted. At the end of the DLC, Waylon is in a hospital bed recovering from his wounds, and is told that his camera contains enough evidence to ruin the Murkoff Corporation. There's a catch though - releasing the footage to the leak site will result in his life breaking, with Murkoff going after his child, his family, everything he loves, in order to hurt him in any way. Waylon decides to upload the footage regardless.

The camera in Outlast 2 is an upgraded version of the original Spatlin camera, and features sound detecting features and a new waterproof case.