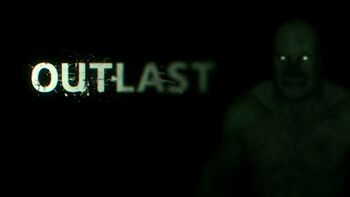 Outlast is the first game in the Outlast series. It was followed by the Outlast: Whistleblower DLC and the sequel, Outlast II.

Outlast is based on the Unreal Engine 3, albeit a heavily modified build of it. It was released for Microsoft Windows on September 4th, 2013 and on PS4 February 4th, 2014. Linux and OSX versions were later released on March 31st, 2015. Outlast is a psychological horror and survival game based around a dilapidated psychiatric hospital known as Mount Massive Asylum. After a project funded by the megalithic Murkoff Corporation caused patients to mutate and become psychotically obsessed with violence, the asylum undergoes a slaughter.

After receiving an email from worker Waylon Park, journalist Miles Upshur comes to Mount Massive to document what he believes to be medical malpractice and unethical treatment of patients. What he finds instead is a hell on earth. Equipped with only a camcorder and batteries, Miles must hide under beds and inside lockers in order to survive - and maybe even escape - the hellish prison he has been trapped in.

After receiving an anonymous email from Waylon Park, Miles arrives at Mount Massive Asylum to investigate alleged mistreatment of the patients there. Here, he discovers dead bodies, mutilated corposes, and dying patients. He soon encounters Chris Walker who throws him through a window.

After awaking, Miles meets Father Martin Archimbaud, who calls him an apostle to the events at the Asylum. Miles investigates, but faces obstruction from Archimbaud, and encounters Chris Walker once more. Miles tries to negate Archimbauld's intervention by returning power to the security control room, but is overpowered by Archimbaud and sedated.

After waking up in a prison cell and leaving, Miles encounters The Twins, who discuss wanting to mutilate him, deciding to wait for Father Martin to give them the ok. Miles drains the shower room and enters the sewer, and is chased below by patients. He now meets Dr. Richard Trager who takes him captive and tortures him. Trager is then crushed by an elevator as Miles escapes.

After meeting back up with Father Martin, Miles encounters the The Walrider as he moves through the courtyard. After collecting three fuses to unlock the upper floor stairwells, he temporarily loses his camera. Once he returns to the administrative block, he witnesses the crucifixion of Father Martin. Miles enters the underground lab and is harassed by the Walrider, who then murders Chris Walker as he attempts to attack Miles. Miles meets Dr. Rudolf Wernicke who explains the events in motion, and tells Miles he must kill Billy Hope to stop it.

Niles kills Billy, but is attacked by the Walrider who is now without a host. Miles becomes the new host, and attacks soldiers and Dr. Wernicke at the exit of the asylum.

Community content is available under CC BY-NC-SA 3.0 unless otherwise noted.