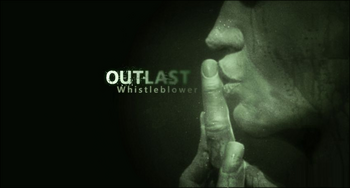 Outlast: Whistleblower is a piece of DLC for Outlast, and is the second game in the Outlast series.

"Whistleblower will let you play as Waylon Park, a software engineer under contract with Murkoff and the man who emailed journalists around the world - including Miles - at the beginning of Outlast. Spending a couple of weeks at Mount Massive, during which he was unable to even talk to his wife and son thanks to strict security protocols, Waylon developed a deep-seated distrust of the profit-motivated scientists and doctors leading dangerous and irresponsible experiments on their patients. Identifying with those poor souls fueled Waylon's anger, and set the stage for his unmasking of Mount Massive's rotten core.

Although Whistleblower tells the story that led to Outlast, it will actually stretch past the events of the first game to show the final chapter in Mount Massive Asylum's story."

Whistleblower is a piece of "overlapping DLC" that serves as both a prequel and somewhat of a sequel to the original game. The game tells the story of Waylon Park, an employee of the Murkoff Corporation and an anonymous tipster who sends an email to Miles Upshur - and is punished for doing so by the powers that be. The PC release was on May 6th, 2014, the PS4 release on May 6th, 2014 in North America and May 7th, 2014, in Europe, and the Xbox One release on June 18th in both North America and Europe.

On September 17th, 2013, the day before the Mount Massive Asylum massacre, Waylon Park decided to send an email to Miles Upshur, exposing the nature of Project Walrider and the experiments conducted within. After sending the email, he is called into the Morphogenic Engine's control room. There, he helps Steve fix the program and repair the camera view footage in one of the machine's pods. Here, Eddie Gluskin breaks free and runs towards the room's reinforced glass, slamming against it and begging for help. Eddie is forced back into the pod, and Waylon establishes connection. He is then told to vacate the premises, and returns to the server room.

Waylon returns to the server room, but is ambushed by Jeremy Blaire and several security guards. They knock him, thinking he had not sent the email exposing Murkoff, and beat him brutally. They knock him out, and force him into the Morphogenic Engine program. Two hours later, he wakes up strapped into a chair. He is tortured by Andrew, who is then forced to stop his torture when he is informed that Billy Hope has achieved "lateral ascension" in the Walrider Project. He fights against the restraints, and sees The Walrider kill on of the patients as the facility goes into lockdown and darkness. Patients known as The Variants break free, and throw the asylum into chaos. During their slaughter of Murkoff employees, Waylon finds a camera and begins to record the events unfolding in front of him. A Variant releases him from his cell.

Once he retreats into the plastic-wrapped hallways outside his cell, he is attacked by The Walrider/ He manages toe scape, and finds himself in a room with a group of Variants stabbing a doctor restrained to the table, stating that "there are no observers here". They decide to spare Waylon, but as he is exiting, he is attacked by a Variant attempting to strangle him. He is chased into a room, the door of which locks behind him, and he can hear the Walrider tearing apart the Variant who was chasing him. Waylon climbs through an air vent and hears some guards talking about a short wave radio in the Prison.

He begins to move towards the radio, and comes across a scientist trapped in an airlock, who begs him to open the doors. Waylon does so, and a Variant runs in, murdering the doctor by slamming his head against the glass. This starts a chain of murders that Waylon is witness to, including finding a half eatern corpse stuffed into an industrial microwave. Outside the kitchen where he discovers this, he finds a dead man hand-cuffed to the door handle. Waylon moves through various rooms while the cannibal tracks him. After unlocking the escape door, the cannibal catches up, and almost slits his throat, deciding instead to shove him into a furnace. After being shoved in, Waylon kicks through the brick wall and barely survives. In this area, he sees a man suffocating in a gas-filled airlock. He travels through the labs with the cannibal following, and turns off the gas so that he can move through the airlock.

Once he exits the asylum, he finds that the courtyard is covered in heavy fog. He moves through the fog, and narrowly misses two inmates who run past. He walks across a basketball court with a variant playing basketball with a severed head, and encounters The Twins, who are guarding a fence. He takes an alternate route through a guard path, and enters the prison. At teh radio, he attempts to contact 911, but is beaten by Jeremy Blaire who appears from behind. He begins choking Waylon with a billy club, but is then scared off by a growl heard nearby. Chris Walker erupts through the door, and chases Waylon out of the prison and onto a tool shed outside. During this chase scene, Waylon sees Father Martin Archimbaud writing "Down the Drain" in blood on the wall, and hears that there's a safe area in the administration block; he begins to move towards this safe area.

He begins to move towards the administrator area, but finds his path is blocked by an electric fence. He searches for the generator, and is stalked by a grinning Variant. He turns off the fence, but a variant turns it on again. Waylon again turns off the fence, and enters a building, climbing up a water tower. He tries to jump, but underestimates the distance, plunging through the roof of the Vocational Block, attracting the attention of Dennis, a multi-personality Variant who mutters about a "groom" below needing a "bride". A friendly Variant tells Waylon about the groom, but Dennis chases him deeper into the block, calling it "Gluskin's Hell". The grinning variant is revealed to be "Eddie Gluskin", from the first part of the game; he says that Waylon will be his beautiful female bride, but that he must remove his "vulgar genitals". Gluskin chases Waylon through the block, all the way into an elevator shaft. Waylon climbs up the shaft, but the ladder breaks under his weight and he is impaled in the ankle by the elevator's roof.

Gluskin thinks that Waylon tried to kill himself, rejecting Gluskin's marriage proposal, and attempts to kill Waylon by activating the elevator to crush him. Waylon escapes, but is chased into a locker by Gluskin, who locks it closed and drags him back to remove Waylon's genitals. Gluskin drugs Waylon, who wakes up to Gluskin castrating and killing two Variants. He is pulled out and strapped to a wooden bed naked - Gluskin prepares to castrate him, but both Gluskin and the bed are knocked over when a Variant attacks. Waylon breaks free, grabs his clothes, picks up the camera, and runs.

Gluskin keeps chasing Waylon, who exits out a high window, shattering his leg below. Waylon limps towards safety, but finds himself in Gluskin's lair once more, moving through the Prison Gymnasium, which has dozens of corpses hanging from long ropes, and rods, castrated and naked. Waylon finds the exit key to the Male Ward through a wedding diorama, but as he is exiting, he is pulled back into the Vocational Ward and is beaten by Gluskin until he is crippled. He is then strung up with the other bodies. Eddie puts a noose around Waylon's neck, telling him that Waylon had "betrayed" him. As he attempts to hang Waylon, the rigging system breaks, impaling Eddie with a bar. As Waylon drops, he is pulled further into the bar, killing him.

Waylon escapes into the Male Ward, seeing the church of Father Martin burning in the distance. He keeps moving, seeing Richard Trager's corpse, and evades the gunfire of Murkoff Tactical Officers. He finally makes it to the Administrative Block, and sees an open door. He sees Jeremy Blaire, mortally wounded, who begs him for help, offering to help him as well. He reaches towards Jeremy, who grabs his hand, pulling him towards Waylon and stabbing him in the stomach. He prepares a second strike, but The Walrider arrives, tearing Jeremy Apart and splattering the room with his body parts.

Outside, he finds Miles Upshur's Jeep outside, and spots Miles as The Walrider. The Walrider rushes the Jeep, but Waylon escapes. The last scene in the game is of Waylon uploading the footage to a leak site, while a man tells him that his entire family, all of his friends, everything he loves, will be harassed or killed to punish him for doing what he's doing. Waylon pauses, reconsideres, and then pushes "upload", fading to black.